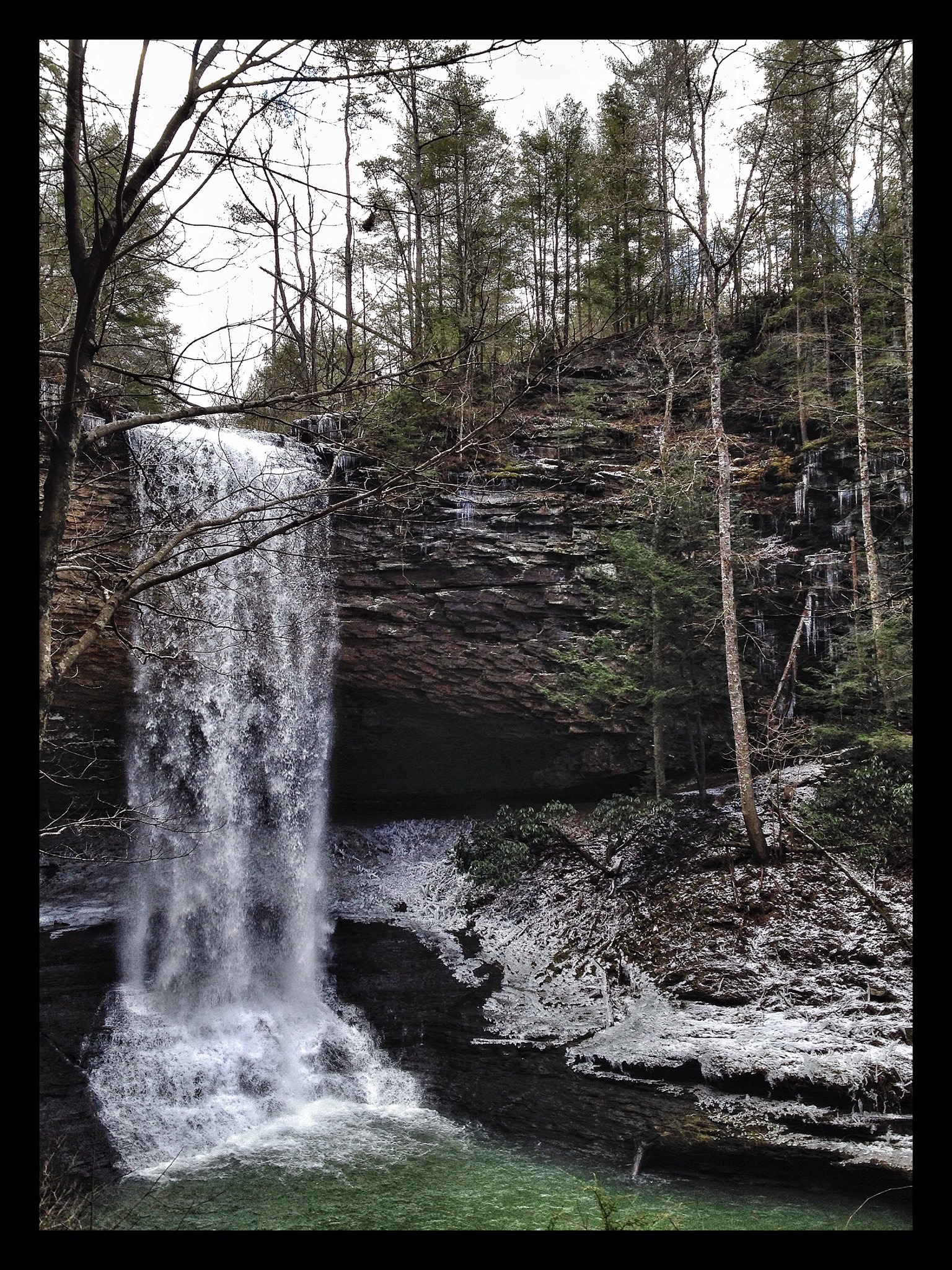 The temperature hung around freezing for over a week and I responded by staying indoors in the warmth and comfort of a controlled climate, watching the world through my protective window until I just couldn’t stand it anymore.

Grabbing my cameras and layering up for the cold, I set out to see a waterfall that I wanted to photograph. A few inches of new snow-covered the trail, and the blank canvas of white made it clear no other soul was walking the path ahead of me. The winter blanket provided a sound dampening layer to the forest floor around me and the silence broken only by the crunch of my boots and the occasional falling icicles from the branches high above me.

I heard the falling water long before I saw it. Making my way carefully down the slippery trail, the river came into view and then the target of the journey.

Heavy sheets of ice hung from the rock walls alongside the waterfall, building slowly from the freezing mist that danced with the wind in the small canyon; coating the ground and the trail that passed behind the cascade as well. A clear challenge presented itself. The best angle to photograph this scene was on the other side of the river. The trail to get there passed behind the waterfall and was clearly covered in thick ice. I cautiously started to navigate the obstacle course and very quickly realized that I was setting myself up for failure. The path had an almost imperceivable slope that announced itself with clarity once I started down it, moving me toward the wall of water and associated freezing river. I just wasn’t in the mood to go for a cold swim.

I re-evaluated my situation and gave myself a conservative 20% success rate of making it through this part of the journey unscathed; and then I quickly but carefully turned around.

I backtracked down the river and found a much more pleasant crossing point and did some off-trail navigating to get to where I wanted to shoot from. The picture above was one of the many I took that day.

I face new challenges everyday. Some of them are self-imposed and some of them present unexpectedly. Few are life threatening and most are easily negotiated. I look forward to each one of these challenges because they are what help me to continually develop my sense of judgement, they strengthen my self-worth, and they create a positive history of accomplishment or failure.

Positive failure? Yes. I don’t ever see failure as a bad thing for me; because I never fail by choice and I never fail from giving up. When I fail it’s only the result of my best efforts not being successful and does not reflect on my character or my abilities. With each, I have a new foundation of knowledge and a new skill set to learn.

The people who need to fear failure are those who use it an excuse to stop trying. I welcome it as a reason to try harder.

I am thankful for the opportunity to wake up each morning and know that by choice, I am always walking the path to success. The slippery slopes I wander upon may create the need for me to change direction, but they don’t require me to give up on the goal of the journey and with determination I keep moving forward.